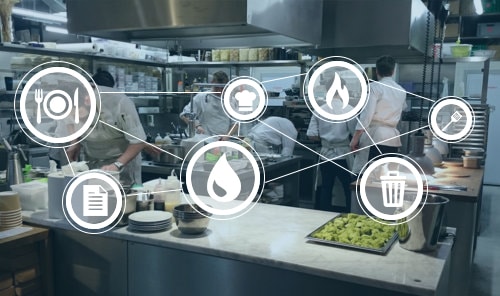 Operating a restaurant profitably is a complex process built on many tasks and many costs. In a business environment that’s more competitive than ever before, site operators and chain executives alike are on the hunt for any way to trim costs without sacrificing the quality of the food or the customer experience.

With more sophisticated monitoring and oversight capacities coming online, chains—particularly limited-service brands—are turning to computerized kitchen management and facility management systems to get a handle on energy costs and, at least indirectly, food and labor costs as well. Such systems, which communicate with, monitor and control the facility’s HVAC, lighting, cooking and refrigeration equipment and sometimes the water supply, are practical examples of the much-vaunted “internet of things.”

If your company isn’t on top of this trend, more sophisticated competitors may soon be eating your lunch.

In limited-service restaurants, food and supplies coming in the back door typically account for about one-third of costs, and labor for another third. The number three cost is usually energy, which may represent 5%-10% of the total cost of doing business (depending on the menu, the customer traffic pattern, the age and condition of the equipment, and the climate, among other variables). According to surveys by the Department of Energy, restaurants use more energy per square foot than any other type of commercial building—more than three times the usage rate of the average commercial structure—as a result of the heavy demands of both cooking and refrigeration within a compact space. What’s more, the price of energy has risen 30% on average over the past five years.

State-of-the-art control systems can easily lead to energy savings of 5%-15%, says Dean Landeche, V.P. of Marketing for Emerson Commercial & Residential Solutions. Some of that is from optimizing startup and shut-down of cooking equipment— something that unit staff tend to be too cautious about when left to their own devices—and some is from better management of the building itself, Landeche explains.

Apart from savings on utility costs, installing computerized kitchen monitoring also can result in better management of equipment, with less downtime, longer useful life and fewer, smoother service calls. “If the system can determine that the refrigeration unit is having problems with the compressor, you can schedule a service call for normal service hours,” Landeche points out. “That can mean the difference between a $200 standard call at an optimum off-peak period, and a double-overtime emergency trip on the weekend.” 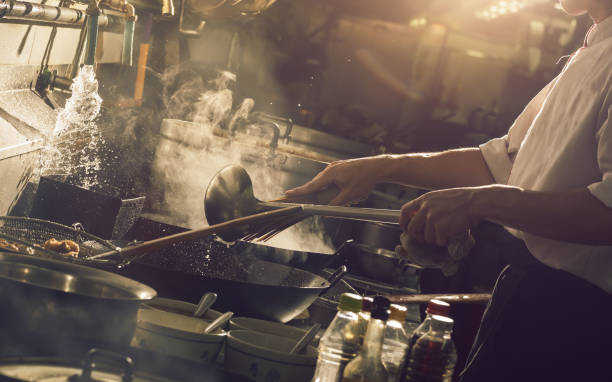 Note that energy management capacities available today may go well beyond those of only a few years ago. It’s the quality of data analytics that stops ongoing energy leaks and maximizes savings, according to Michael Gainsley, Senior Director of National Accounts for EcoEnergy, a division of UTC Climate, Controls & Security. EcoEnergy’s Managed Restaurant Energy Services system combines energy savings with advanced analytics including a Service Window or daypart analysis of energy usage, Gainsley explains. For instance, “when a restaurant moves from breakfast service to lunch service, specific assets in the kitchen are no longer required. Our analytics and algorithms detect any operating standard violations where assets are not fired up or down, and the operations center continuously works with the crew to ensure that such violations are eliminated or kept to a bare minimum,” he says.

HVAC typically accounts for about 28% of a restaurant’s energy consumption, second only to food preparation. Computerized management of the building’s HVAC is another big aspect of the communicating restaurant, further reducing energy costs while making the environment more pleasant for guests and staff (and thus more profitable for management). And it removes another layer of worry for unit staff.

“If an HVAC system isn’t operating properly, we can assist the store manager and technician in identifying and resolving the issue quickly,” says Paul Kuck, Senior Energy Manager at Ecova, which offers utility solutions and sustainability management to restaurants. “That allows the manager to do what he’s supposed to be doing, running a restaurant, not troubleshooting issues when the AC isn’t working correctly.”

Water used to be a minor utility bill in restaurants (perhaps 5%-10% of utility spending). But rates are rising faster than any other utility bill, about 8% a year on average, according to Kuck. “People are paying more attention,” he says. Ecova works with clients to implement technologies like aerators, spray valves, low-flow toilets and urinals, and high-efficiency dishmachines and ice machines as part of an overall strategic resource management program, resulting in substantial savings on water bills.

Other companies are water specialists. Ever watched sprinkler systems on timers turn on even though it’s pouring rain? A company called Weathermatic focuses primarily on landscape irrigation—something that can represent 55%-60% of a restaurant’s water bill, according to Bill Georgas, Senior V.P. of Business Development.

“We can show direct and repeatable savings by adding science to the way we irrigate,” Georgas promises. That means not only state-of-the-art hardware like drip sprayheads but also sophisticated computerized control systems that take into account site-specific conditions: heat, humidity, sunshine, even water runoff patterns based on the type of soil. A private internet connection allows managers to monitor conditions at each restaurant and alerts them quickly to any problems. 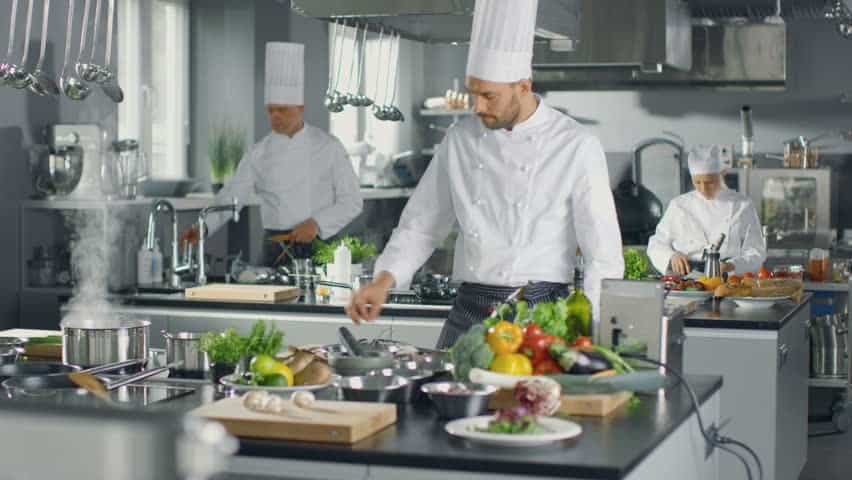 How Smart Restaurants Are More Efficient

Today’s expensive real estate and smaller kitchens are part of the pressure pushing restaurants toward communicating kitchens, notes Emerson’s Landeche. That’s especially true for limited-service restaurants that have “a more intense system, a smaller footprint that’s not tolerant of disruption,” he says. “As space becomes more constrained and more expensive, foodservice operators don’t have as much redundant equipment. So, one emerging trend in energy management is a greater focus on keeping core devices up and running.”

The connectedness of the smart kitchen goes way beyond the site itself, and that’s a big deal for regional, franchise-system and home-office executives. “Internet-of-things technology can help restaurants deliver real-time data to and from the cloud and monitor the execution anytime from anywhere,” says Mario Ceste, President of Kitchen Brains, which offers energy management, quality management and HACCP compliance management components in its Smart Commercial Kitchen suite.

Bill McClain, a consultant who most recently worked with Kitchen Brains, believes in the transformative power of data. Over time, he says, archived data creates “a deeper understanding of what’s affecting what. If sales are down on a given day, is that because the weather was bad? Or does business depend on which crew was working? What- ever metric you use gives you a quick idea of which stores need your attention. A regional manager who, in the old days, would visit all of a chain’s units on a regular schedule can now wake up on Monday morning, look at the current metrics and see who’s got a problem and should be visited first.”

Automated systems are increasingly important in managing a low-skilled, high-turnover workforce, particularly as minimum-wage increases step up the pressure to do more with less. “The kitchen staff in a full-service restaurant may have gone to chef school, but the 18-year-old in the back-of-house in a quick-service restaurant needs to be monitored,” says McClain. “Even something as simple as a timer can make the operation less labor-intensive, because you don’t have to train a guy to cook by eye.” Food and labor—restaurants’ two biggest costs—are addressed directly by systems like Kitchen Brains’ Quality Production Manager system, which wirelessly networks appliances and guides employees on all aspects of food preparation and service: it tracks market conditions, advises how much food to produce and when to start and stop cooking, monitors hold times, and advises when food should no longer be sold, ensuring 100% freshness. The result is less waste, lower overhead costs, greater efficiencies, and increased annual sales.

Improvements in food quality and food safety also are touted as key benefits of kitchen management systems by Jay Fiske, V.P. of Business Development at Powerhouse Dynamics, developer of the SiteSage asset and energy management system. “Better visibility and control of the equipment means less waste in processes—catching problems earlier so you don’t repeat the same mistakes,” he says. “Digitizing the whole HACCP process is like an insurance policy to remove as much risk as possible, eliminate opportunities for mistakes, and prevent catastrophic situations. What’s the ROI on that?”

Before You Invest In A Communicating Kitchen 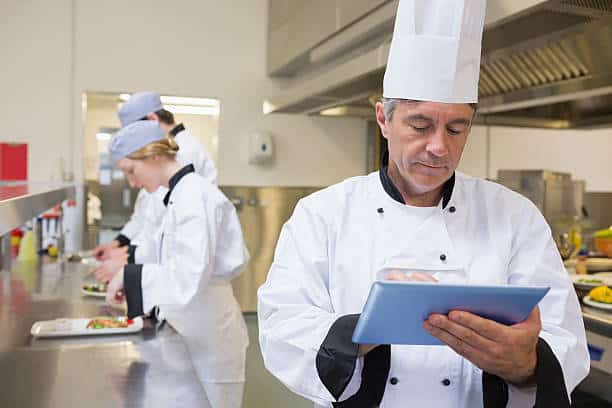 Thinking about investing in a communicating kitchen? Here are some things to ponder before taking the leap.

1) Think about what you have to work with. How do you expect a new kitchen management system to further your overall business goal of maximizing the customer experience while boosting your bottom line?

How much of a transformation are you able to make? Do you know what’s going on at the unit level throughout your chain or franchise? How much unit or franchisee buy-in can you expect? Just connecting equipment to an energy management system won’t automatically achieve energy efficiency; the data must be collected and analyzed and then you need to alter staff behavior and procedures accordingly.

2) In weighing what to spend, consider the ROI of longer-lasting equipment. Just one example: an energy management system can alert staff when doors are left cracked open on refrigerators and walk-ins, making units work harder, shortening their useful life—and that reduces the monetary value of your initial investment.

3) Make sure before you buy that the system accommodates future improvements. If you want to add new equipment or make modifications to the HVAC system in a year, will you be able to do so?

4) But understand that retrofits are costly. If you’re in a position to make a sweeping upgrade immediately, you’ll save money in the long run. Retrofits are ultimately more expensive in part because they require workarounds for installation.

5) Make sure your management system will be adequately supported. What are the provisions for staff training in using upgraded equipment or going through new checklists? Will managers and maintenance personnel have access to a call center to help clear up questions, do a deep dive on data or troubleshoot problems?

6) Don’t overload unit staff with data. Electronic controls and alarms on numerous individual pieces of equipment can quickly become a burden to kitchen staff. At worst, they’ll be ignored. That’s one of the primary reasons that a central kitchen energy management system is more efficient than installation of separate pieces of “smart” equipment.

7) Figure out the role of remote data access and oversight. What information on unit performance will be available remotely on a computer, tablet or mobile phone? Who will have access to this information—unit managers? regional managers? home-office staff? maintenance people? What modifications can be made remotely—changing temperature levels? changing the irrigation schedule? changing food production levels? Who will be authorized to make these alterations?

8) Plan ahead for a smooth rollout. Especially in older buildings, tasks like adding electrical cables can become a major challenge. Make sure the people overseeing your new facility management system can handle the installation expeditiously when each site is closed.

9) Allow for initial troubleshooting. After 30 to 60 days, you’ll have enough information to make modifications like setting lighting times appropriately or tweaking the thermostat on HVAC units.

10) Pair your control system with a well-thought-out preventive maintenance program. Work with your service agency or agencies on a regular maintenance schedule for each major piece of equipment.

The post The Communicating Kitchen Movement appeared first on Specifi®.