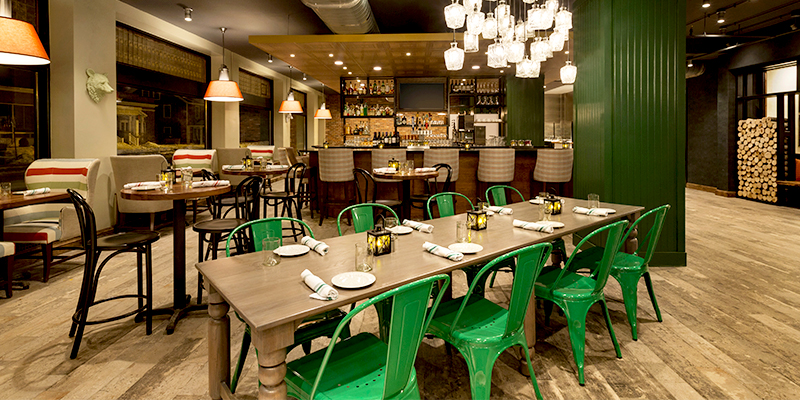 Hotel Saranac has been awakened, not with a kiss but with an expert, respectful restoration.

When the Roedel Cos. purchased Hotel Saranac, it was a ghostly presence at the heart of the mountain village of Saranac Lake, N.Y., looming over the tranquil lake of the same name. Ever since its opening at the height of the Roaring Twenties, the hotel had been a vital part of the local scene. It hosted countless meetings, conferences, balls and soirées—and accommodated not just one, but two Winter Olympics. For a time, it served as a hospitality college, where students trained to cater to visitors all around the Adirondacks.

But by the time the new owners stepped in, the historic hotel had gone dark except for a giant electric sign on the roof spelling out HOT SARA—all that was left of the HOTEL SARANAC name once proudly emblazoned in letters several feet tall.

The New Hampshire-based Roedel family had generations of history in Saranac Lake, so this would be a labor of love, not just another national-brand hotel to renovate and profitably manage. The various firms tasked with reviving the hotel were scattered all over New York and New England, but they had a clear directive: express the soul of Saranac Lake and the rugged Adirondacks, while honoring historic preservation. “The Adirondacks and the Saranac area are known for lakes, camping and outdoor activities,” Arons explains. “That definitely was a focal point.”

To maintain the informal vibe and maximize food production within the constraints of the infrastructure—without cutting back on seating in the dining room—designers retained the open kitchen. The display kitchen produces all of the made-to-order meals for the restaurant and bar. There’s a custom stainless chef’s counter and wait station, along with key cooking items from Vulcan (a charbroiler with convection oven, six-burner range with convection oven and a griddle with a refrigerated base and salamander), a Pitco fryer assembly, and True refrigerated prep tables and undercounter refrigeration.

Arons says the Campfire Adirondack Grill + Bar is his favorite part of the project. It “features an Adirondacks-totable locavore menu based on the North County’s game, fish, produce and even maple syrup, along with local craft beer,” he says. “Everything in this space reflects a real glamping atmosphere complemented by a great menu.” 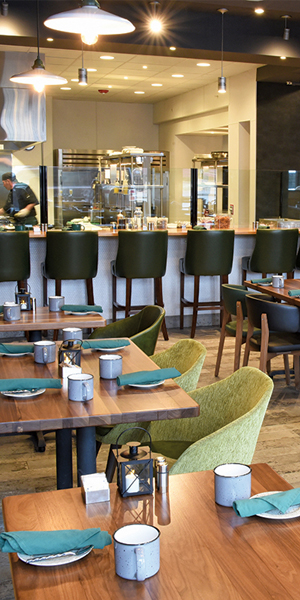 The first-floor back-of-house is for bulk prep and food production for the restaurant, room service, banquets and catering. Yet Arons says it’s a simple setup with, at its core basically, “four pieces of equipment and an exhaust hood.” Kitchen appliances include an Alto-Shaam double-stacked combi with a smoker function, as well as a six-burner range with oven and 20-gal. kettle and 30- gal. tilt skillet, all by Vulcan. There’s also room for prep tables, walk-in refrigeration and dishwashing. 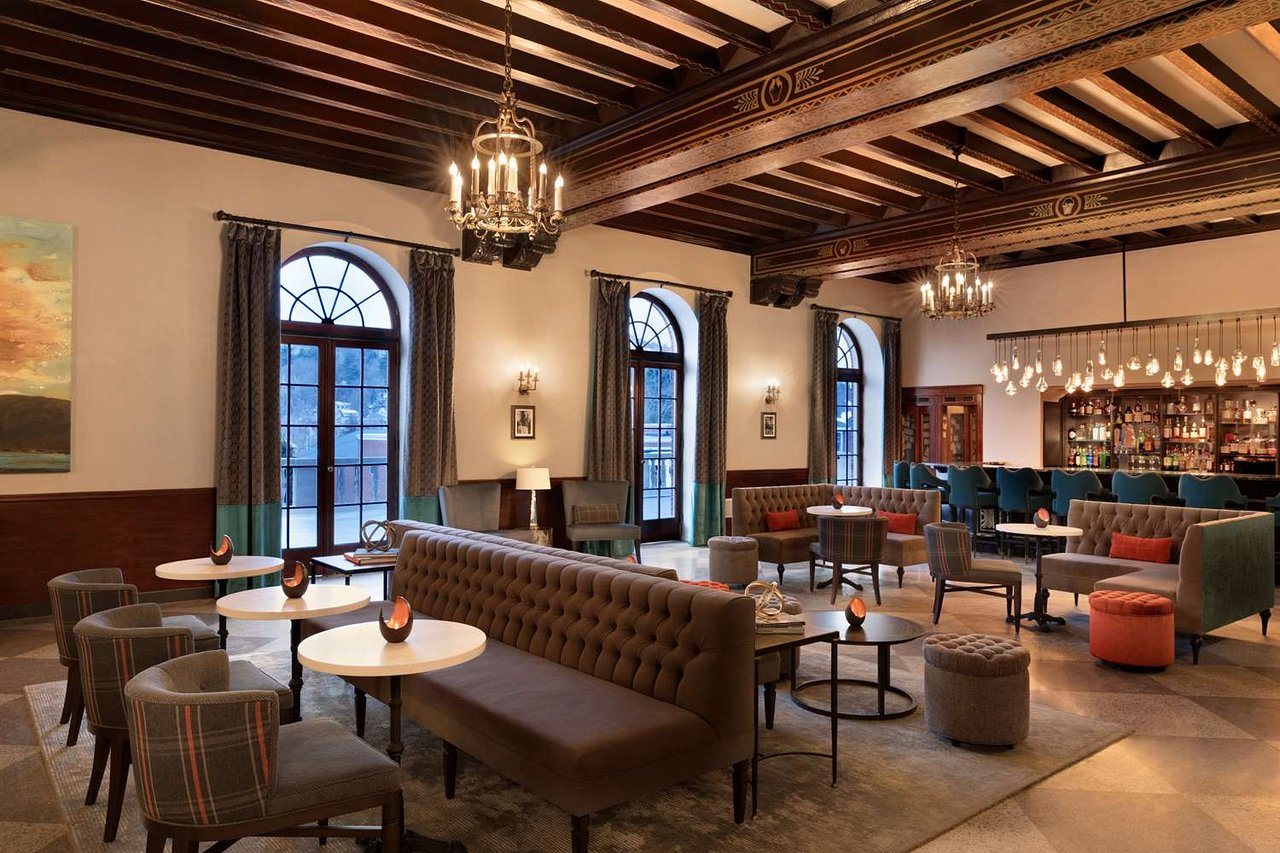 The first-floor back-of-house is for bulk prep and food production for the restaurant, room service, banquets and catering. Yet Arons says it’s a simple setup with, at its core basically, “four pieces of equipment and an exhaust hood.” Kitchen appliances include an Alto-Shaam double-stacked combi with a smoker function, as well as a six-burner range with oven and 20-gal. kettle and 30- gal. tilt skillet, all by Vulcan. There’s also room for prep tables, walk-in refrigeration and dishwashing.

Additionally, on the first floor is the lobby bar, with a fabricated glass-rack wall shelf, an under-bar liquor display, back bar coolers and underbar ice chests by Krowne, and a Perlick six-head beer dispenser for a rotating selection of local craft beers. The second-floor bar, adjacent to the wood-beamed Great Hall and a seasonal outdoor dining terrace, has a similar setup, with a Krowne bottle display, underbar cocktail station and back bar cooler, a CMA undercounter dishwasher and a Perlick three-head beer dispenser.

Designers charged the second-floor banquet kitchen with preparing meals for up to 300 diners at a time, often during restaurant and room-service rush periods. To make that logistically possible with the limited space and labor available, Arons sold the owners and their F&B operations executives on the idea of a cold plating system from Alto-Shaam. “It’s the most interesting equipment used in the design of this project,” he says. “Having the ability to cook, chill and plate cold reduces labor and provides the flexibility needed to retherm just before an event with just-in-time food quality.”

Having successfully combined 21st century amenities with an early 20th century vibe, the revived Hotel Saranac is now affiliated with the “boutique” Curio Collection by Hilton as well as with the Historic Hotels of America list of the National Trust for Historic Preservation, substantially extending its brand impact.

Arons returned to the hotel as a guest in the early spring of 2018 for a final run-through with the owners, managers and foodservice staff. He dined at the Campfire Adirondack Grill + Bar. At the same time, he was “just kind of drinking it in; knowing the history of the hotel and what it took to restore it.”

Not so long ago, Arons says, foodservice wouldn’t have gotten so much attention in this type of historic renovation. “The emphasis on the menu might have been less a decade ago,” he says. “The farm-to-table movement, and adapting that to the campfire theme, show a real emphasis on the guest’s experience and not just the food—but the food as part of the experience.” Some other hotel amenities, such as the spa, might also have received less space and emphasis in the remodel without the current focus on customer experiences, he believes.

Some guests might take a pass on the spa or other hotel amenities, but there’s one experiential aspect nobody can possibly miss: the new, full HOTEL SARANAC sign blazing over the town and the lake. HOT SARA has been awakened, not with a kiss but with an expert, respectful restoration.